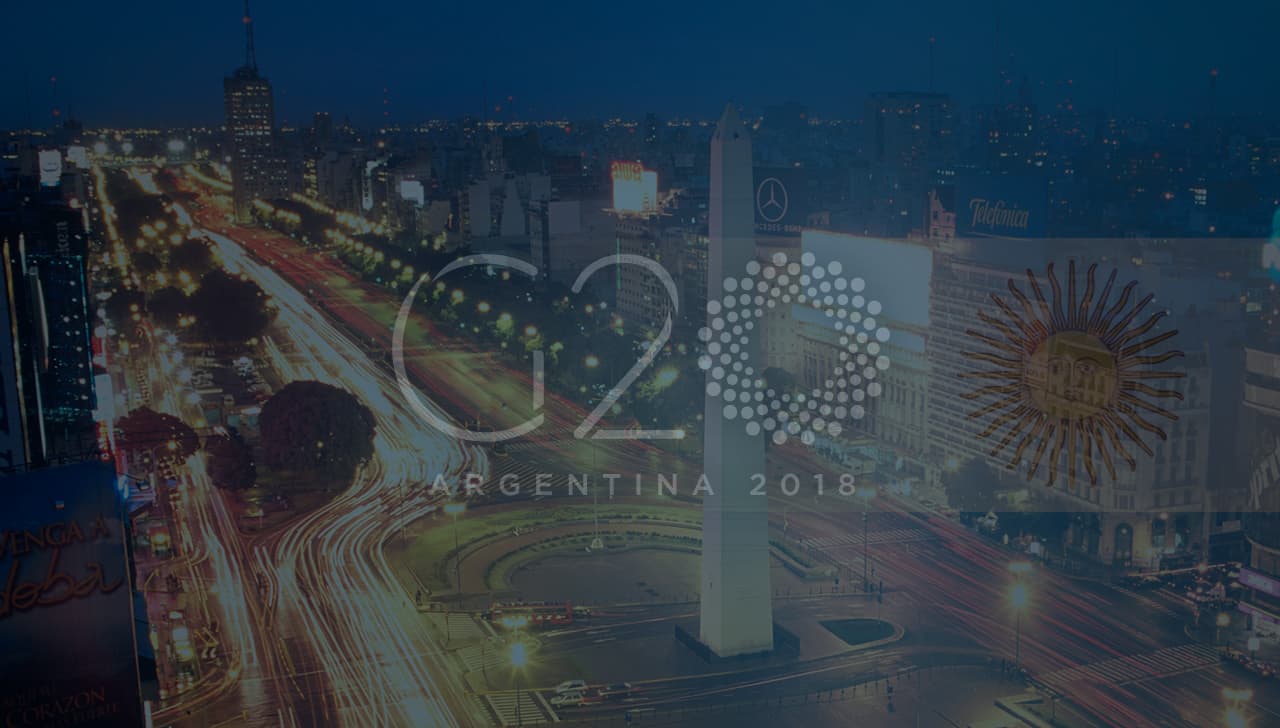 For the first time in history, a Latin American country is the host of the Group of Twenty or G20. A unique opportunity was given to Argentina and its president Mauricio Macri, who without delay, stepped forward and got into the job, before countries like Brazil or Mexico.

First, let´s understand what the G20 is? The Group of 20 is a reunion that summits the most powerful countries in the world, which lead the industrialized and emerging economies today.  The influential leaders reunite once a year and aim to discuss policy about the promotion of international financial stability. It seeks to address issues that go beyond the responsibilities of any one organization.

The members of the G20 are Argentina, Australia, Brazil, Canada, China, France, Germany, India, Indonesia, Italy, Japan, Republic of Korea, Mexico, Russia, Saudi Arabia, South Africa, Turkey, the United Kingdom, the United States and the European Union. When we sum up the economic power of all these countries, we are talking about the 85% of the global gross product, about two-thirds of the global population and 75% of the international commerce.

Now, the G20, since it started back in 1999, had developed its language. They have established their own lexicon words that are not commonly used. Comprehending this particular argot makes it easier to understand the purpose of the group and how they work.  For example “Troika.” It is a Russian word and means a triad (three people working together). In this case, the word refers to the teamwork carried out by three specific countries in the G20: the country that held the chair last summit, in this case, Germany 2017 the country that holds the chair today Argentina in 2018; and the country that will preside the next summit, Japan in 2019. This arrangement is to guarantee the continuity of the work and the policies created at each reunion.

Another word used in the political jargon of the G20 is “Sherpa.”  Means the natives from small villages in Nepal. A word that refers to the noble people that lead climbers and expeditions to the Everest’s summit. Hence, it is understandable that under this metaphor, leaders from the G20 are represented and guided by their Sherpas. They are high-level politicians and advisers that coordinate meetings, prepare negotiations, facilitate understandings of the subjects, make an alliance with different parties or other Sherpas, and help to focus the conversations and results on what matters. Argentina’s Sherpa is Mr. Pedro Villagra Delgado. He has been on tour around the world doing exactly what a Sherpa does: meeting with different leaders in finance, commerce, social and private funding world associations, in order to lead the conversation to the three (3) presidential priorities for 2018:  the future of work, infrastructure for development and a sustainable food future.

Argentina is the protagonist today. For the first time, a Latin American country is the host of such an important event. Since December 2017 and for the whole year 2018, the most important cities in Argentina have been the platform for the leading voices of the G20. Córdoba, Salta, Puerto Iguazú, Mar del Plata, Mendoza, and naturally Buenos Aires are open to newcomers. Cities that offer their splendid history, their architecture, their culture and their gastronomic way of life. Throughout the year, the urban life is filled with international visitors, diplomatic groups, outstanding guest speakers and the most prominent leaders of the world. Hence, the country has prepared to meet the task, especially in communication and transportation.

Transportation is vital for the success of the G20, and business enterprises like public transportation have taken the challenge.  Private Jets and rental helicopters are an adequate way of transportation in busy urban areas. From Buenos Aires to Córdoba a private jet can take approximately an hour and four minutes without the usual delays that present commercial flights. A group of delegates can fly to a meeting in Cordoba and be back in Buenos Aires, without the inconvenience of overcrowded places and unnecessary check-in lines.

But there is more to the G20 than meets the eye. Besides meetings held by Sherpas, public officers and representatives from the international organizations, Affinity Groups encounters are also part of the forum. “Affinity Groups,” are groups that represent different parts of the society. In the dynamic of the G20, the Affinity Groups create their spaces for debates and workplaces.  In the end, these groups will produce and deliver a paper with their observations and their recommendations. The Affinity Groups are: Business 20 (international business community); Civil 20 (having as chair and co-chair Poder Ciudadano and RACI, respectively); Labour 20 (unions); Science 20 (science-related matters); Think 20 (gathering experts from around the world); Women 20 (linking civil society organizations focused on women with leading women entrepreneurs); and Youth 20 (platform for the visualisation of young voices).

Last week in Cordoba, the Youth 20 or Y20 reunion took place. Over 80 young representatives, between the age of 18 and 30, participated with ideas, opinions and what they consider possible solutions to one of the paramount priorities for the Argentina G20 presidency: “The Future of Work.” The Y20 used the opportunity to have their voice heard under the slogan “Shaking the present, building the future.”

From the 30th of November to the 1st of December, leaders of the most important economies in the world will come to Argentina. They will work those two days with the premises set for the meeting. Then, Argentina will pass on the chair to Japan.

South American Jets, under the spirit of the G-20, recognize and values this kind of events that contribute to the growth and advance of the society that we live in and welcome the leader and the efforts to construct a better future.

I am fundamentally an optimist. Whether that comes from nature or nurture, I cannot say. Part of being optimistic is keeping one’s head pointed toward the sun, one’s feet moving forward. There were many dark moments when my faith in humanity was sorely tested, but I would not and could not give myself up to despair. That way lays defeat and death. Nelson Mandela

South American Jets recognize and values this kind of events that contribute to the growth and advance of the society that we live. During the G20 reunions, our company will be at the disposition to fly from and to the different locations where the meetings will take place to provide efficient flight solutions to the diplomatic and other participants that play an essential role on the event.

FBO, all the services you need from commercial aviation in a single operator.