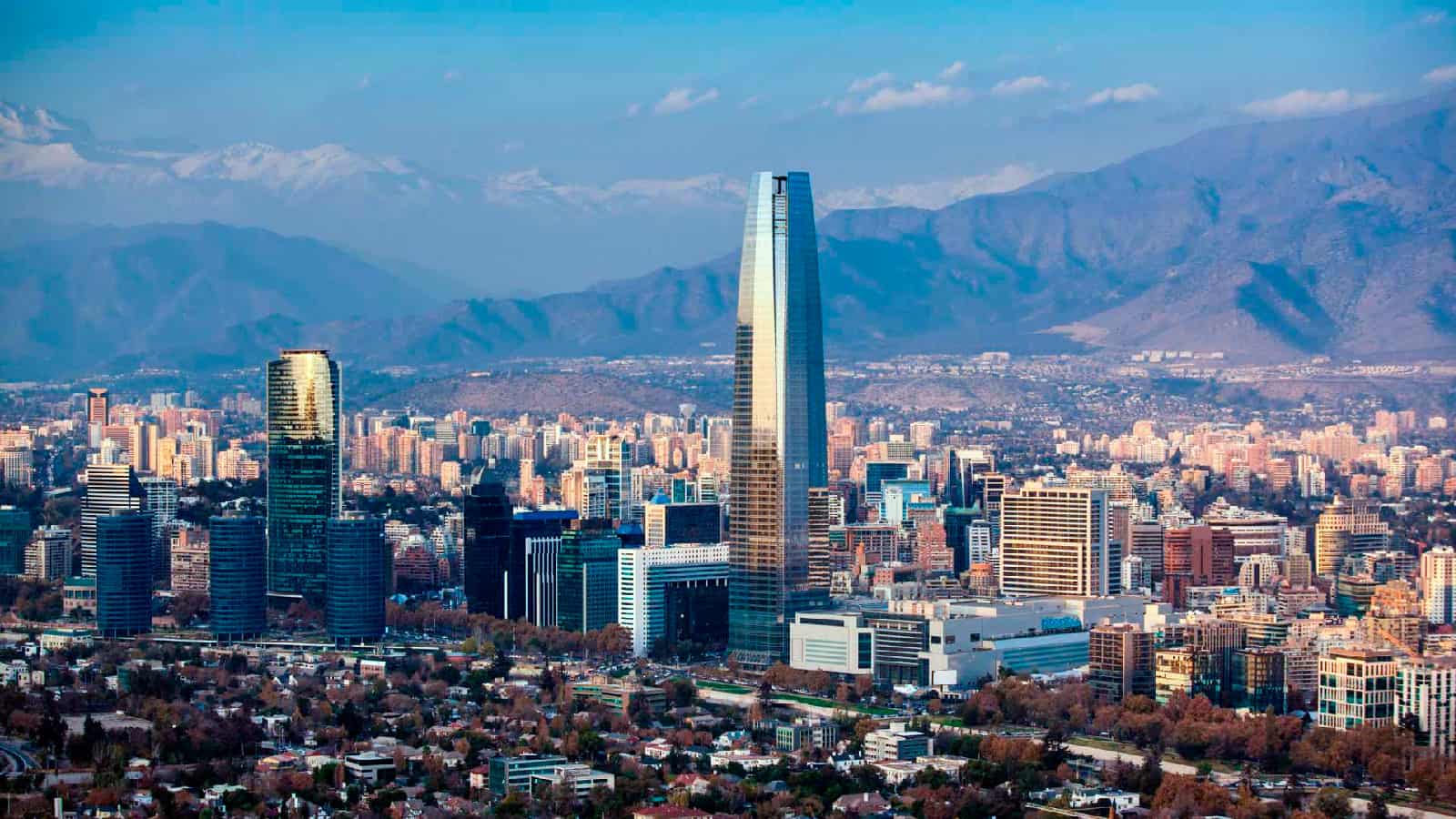 The Great Santiago and its people

Santiago de Chile is at 567 meters above sea level. Nearly 35% of the country’s population lives there, that makes it number sixth most populated city in Latin America.

Santiago is located today in the country’s central valley better known as La Cuenca de Santiago, crossed by the Mapo River. The landscape was shaped by the joint action of numerous natural singularities. There is a rich variety of species living in the valley, and none are dangerous to men.

Santiago leads important social, economic and environmental issues, and is known as the second most competitive city in Latin America, after Sao Paulo.

Considered a global Beta class city, it ranks as the 53rd city with the highest income in the world and the smartest city in 2013, according to a global study released by the Economist Intelligence Unit (EIU).

Santiago is famous for its high cultural level and the high rates of literacy that possess, creating an extensive and prolific literary production.

Santiago is an example of resilience

Resilience is that exceptional ability to recover in difficult times. In nature, an example of resilience is found in that tree that begins to bloom, when its branches have been cut.

Santiago de Chile has been an example of resilience. It is a city that knows how to rise from earthquakes and floods that have hit the city in more than one occasion.

The city has developed a model that overcomes the natural catastrophes that so often hit Santiago, taking into consideration the human factor, and creating policies on human scales. This model is aimed at making cities stronger in the face of physical, social and economic challenges.

The strategy to achieve resilience has been the collaborative work between all the actors of society. The articulation between the state, private enterprise and society have been the focus of the actions.

In spite of the difficult moments, Santiago has sustained accelerated development over time. Successful public service policies, the expansion of the road network with efficient urban highways and a highly developed transport system are some indicators.

Economic and financial policies have increased their attractiveness for the industry. Today, 75% of Chile’s factories are located in Santiago.

The city is the main development place in Chile. The América Economía magazine, says that is one of the best cities to do business in Latin America.

The sources of income, 79%, come from the tertiary sector. The free trade agreements signed with major world powers, use Santiago as a platform to enter the Latin American market.

An important indicator of prosperity, in Santiago de Chile, is the entrepreneurial ecosystem that presented a significant upturn in the last five years.

Many of the new ventures are based on technology, perhaps due to the production of software that optimized the use of mobile telephony and connection modes.

One of the factors that have favored the entrepreneurial movement in Santiago is the active and well-planned participation of public and private entities.

The resilience’s character and the permanent search for prosperity have to produce prestige international representatives. Here are 8 Chilean entrepreneurs with remarkable national and international success.

The Chilean enterprise has received international recognition. It’s about the biochemist Fernando Fischmann, a technologist who in the ’80s managed to develop the idea of ​​artificial lagoons. This technology allows the maintenance of large volumes of water at very low cost. From a concrete vision of sustainability on water, this entrepreneur materialized this idea in his Crystak Kagoons project.

2. Marcelo Guitar, the man of the Benedictine Waters

His experience has become cases studies for his achievements and for his peculiar way of tracing his failures. Nowadays, from his company Guital y Partners, he produces a strong line of healthy food with strong success.

3. Luis “Conejo” Martinez, the most famous peanut business in the world

In 1991 Luis met a NY the peanut business with such a level of detail, that by 2001 he had spaces in 25 of the most famous corners of NY.

The Mall of South America was founded by Paulmann in 1978. Today it is the largest retail chain in Latin America. Paulmann is the second richest man in Chile, according to Forbes magazine. His business has a presence in Chile, Colombia, Brazil, Argentina, and Peru.

He is an enterprising scientist, a pioneer in the development of biotechnologies. He participated in the creation of the hepatitis B vaccine and the discovery of the Hepatitis C virus.

This pair of entrepreneurs developed what is nowadays, the most visited site of a journal specialized in architecture. Both, professors of architecture and proactive scientists.

Karina is the CEO of an agricultural holding made up of 4 companies producing oats and oil raps. The enterprise generates an estimated annual revenue of US $ 100 million. This entrepreneur stands out in a territory traditionally destined for men.

With a “wave of passion, energy, lack of control and creativity”, Carolina undertook the business of producing healthy snacks. Your company, Tika, serves more than 5% of the national market. Tika exports its products to the USA, Brazil, Europe, the United Arab Emirates, China, and Korea.

10 reasons to travel to Santiago to invest in new businesses

The Santander Group asseverates that Chile ranks number 55, out of 190 countries in the report “Doing Business report of the World Bank -2018”. This indicator makes it attractive for investment travelers.

Some of the reasons for this apparent economic and financial success are, in summary, what we share in this Top 10:

These conditions have been validated by important referents of the world economy. The best proof is the exponential growth of international investments in Chilean soil.

2. The results of prestigious economic reports that define it with excellent business projections.

The World Bank, the Inter-American Development Bank, the Santander Group, an important and prestigious international economic magazines validate it as a thriving city, and in economic developments that offer guarantees to investors.

The security of tenure and private property, the guarantees of support and protection of investment, resulting in a competitive attractiveness in comparison with other investment spaces in the region.

4. The low financial risk involved in investing in Chile

A growing population, which is professionalized and diversifies its economy, which has become an attractive market, together with growing public and private investments and the wide offer of financial support for investment, has decreased to very competitive levels, the risk of investment.

5. The legal treatment of the foreign investor, under the same conditions of the local investor.

In many countries of the region, the foreign investor observes barriers to replicate their investment. From having to share stocks, to oblige in handling different fiscal and financial conditions.

In Santiago, the conditions of a foreign investor have been matched to those required of a local investor. This has increased competitiveness and has surely boosted the quality of the local offer.

6. The riches and natural attractions.

Santiago contains invaluable natural wealth and attractions. This potential has been greatly benefited in many business models linked, for example, to tourism and recreation.

A city in population growth and planned development is definitely a great attraction for investment. The market grows orderly and the state is organized with the private company and society to receive it.

8. The infrastructure of high-level services.

The development of roads, the optimization of public services, the expansion of productive infrastructure and the optimization of distribution systems are notable in Santiago. These conditions have made it a thriving and attractive place for entrepreneurs and investors that come from many parts of the world.

10. The simplified of the investment procedures and the wide range of solutions for investors.

The state´s portfolio of solutions to investors and the reduction of investment processes and procedures, allow the investor a quick return on their investment.

financiero. Its free market strategies provide competitive advantages over other countries in the region.

As a result of these conditions, a large number of profitable businesses have proliferated. Santiago is described as an open door for any foreign company that wants to operate in it.

We share ten of the investment opportunities suggested by the experts:

11. Real estate investments, due to the attractive financing offers of the bank.

The economic stability in Chile, have made it an interesting financial attraction. Its free market strategies provide competitive advantages over other countries in the region.

As a result of these conditions, a large number of profitable businesses have boomed. Santiago is described as an open door for any foreign company that wants to operate in it.

We share ten of the investment opportunities suggested by the experts:

1. Real estate investments, due to the attractive financing offers of the bank. In this sector, investments in the hotel and tourism services have also been lucrative.

2. Travel agencies are at the forefront, facilitating the connection with many other business models that support tourism.

3. Gastronomy, either in services that provide food or services and complementary products for this industry.

4. Entertainment spaces such as nightclubs or other offers of services and spaces for recreation.

5. The aesthetics sector in services, look attractive is a business linked to aesthetics as training centers and cosmetic products, among others.

7. Consulting. The elevation of the level of professionalization and expertise in multiple areas has allowed the boom of multiple consulting services. Important schools in this area have been internationally recognized to the point of having developed accreditation systems with high international prestige.

8. Mini stores are medium or low capital investment options that can be very profitable

9. Marketing. Entrepreneurial development demands competitive marketing services in all its dimensions, in order to boost the acceleration of the growth of companies from their early phases of entrepreneurship.

10. Available franchises On the web you can find interesting offers of franchises available. Those observed in a brief review for this article include DirecTv, EL Automóvil Club de Chile, as well as other chocolate franchises, bakeries, fast food outlets, breweries and many others related to aesthetics and beauty

A well-known news portal, in Chile, presented the results of the Chilean Identity Study. According to this report, Chileans are recognized for their sport, gastronomy, festivals, and traditions.

For culture´s lover, visiting Santiago is a real feast. 174 archaeological, architectural and historical monuments are on the menu.

If you love theater, you can visit some of its 144 movie theaters. Surely you will know that it is the epicenter of the Santiago´s Theater Festival “Santiago a Mil”. In this city, you can find the main theater companies in Chile.

If you travel to Santiago for business or tourism, we suggest you check this list of attractions to visit

1. If you are passionate about the Bohemian life and style, you will love the Lastarria quarter and Bellas Artes quarter. There is a fascinating heritage architecture, nestled in a fresh and green landscape, with small streets very well structured.

2. The well-known Civic Center contains the Plaza de Armas, a multicultural meeting point for painters, comedians, musicians and so on.

3. Santiago´s Metropolitan Park. The view of the city from the Park is amazing. It has been considered the 4th largest urban park in the world. Many trails, terraces, viewpoints and spaces to unleash relaxation.

4. Palacio de la Moneda. In every capital city, visiting the palace of the coin is a great tourist attraction. The one in Santiago dates from 1785. There, the room is exhibited where the ex-president Salvador Allende died

5. The Cousiño Palace was the home of one of the richest families of the colonial era, empowered by the mining business. Nowadays it allows the public to know the details of the original setting.

6. Museum of memory and human rights

This museum shows an extensive exhibition about the terrible military dictatorship that hit Chile in the period 1973 and 1990. Dozens of interactive, auditory and visual resources provide evidence about what was everyday life.

7. Barrio el Golf is known as the financial heart of Santiago. Green areas alternated with modern and glazed architectures in which important international firms are located.

Benefits of flying on a private jet

FUN in the air for corporate events

The Coolest destinations for the holidays