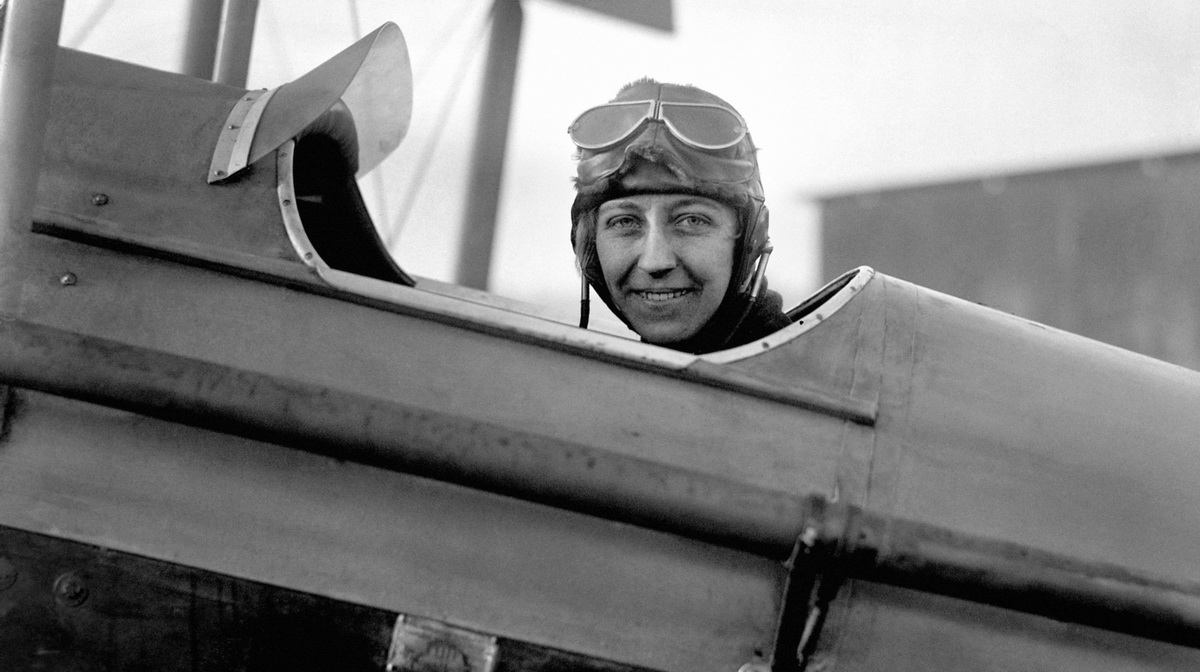 The First English Women to Conquer the Sky

Like military history, the history of aviation seems to be reserved exclusively for men. From time to time, however, a female figure appears whose deeds and accomplishments outshine those of their male counterparts. That is the case of Amy Johnson (1903 – 1941).

The pioneering English aviator’s career is no less remarkable and inspiring than those of her contemporary colleagues’. Born in Yorkshire (1903), United Kingdom, Johnson was the first female pilot to set several worlds’ long-distance records during the 1930s. She was educated at the University of Sheffield, where she graduated with a Bachelor degree in economics. A few years later, she began flying as an amateur pilot. She obtained her aviator’s certificate in June 1929, and a pilot’s “A” license two months later, both from the London Airplane Club. The same year she also became the first English woman to earn a ground engineer’s “C” license.

Johnson always had her father’s unconditional support. He even gave her money to purchase her first aircraft, a second-hand de Havilland DH.60 Gipsy Moth that she named “Jason” after her family’s business. Worldwide recognition for Johnson’s accomplishments came in 1930 when she became the first pilot to fly from England to Australia. She departed Croydon, south of London, on May 5th and arrived in Darwin, in Australia’s, Northern Territory, on May 24th after an 11,000 miles course (the aircraft she piloted to set this long-distance record is preserved in the Science Museum, London). In July 1931, Johnson and her co-pilot, Jack Humphreys, were the first to break an intercontinental speed record by flying a de Havilland DH.80 Puss Moth from London to Moscow in one day. Working together, they complete the 1,760 miles course in approximately 21 hours, before continuing across Siberia to Tokyo, setting an additional record for their flight time from Britain to Japan.

Amy Johnson married Scottish pilot Jim Mollison in 1932. He had proposed to her during a flight only a couple of hours after they first met. The same year she broke her husband’s record by flying her Puss Moth, named “Desert Cloud,” from London to Cape Town, South Africa. Next year, Johnson and Mollison set a transatlantic record, as they flew their de Havilland DH.84 Dragon nonstop from Britain to North America. They departed South Wales heading to Brooklyn, but they ran out of fuel and crash-landed at Bridgeport Municipal Airport, in Connecticut. Both pilots were injured, but they recovered quickly. In 1936, Johnson made her last record-setting flight, breaking her own Britain to South Africa record in a Percival Gull Six. In 1938, she divorced Jim Mollison.

The circumstances concerning her death retain an air of mystery. During the Second World War, Johnson joined the Air Transport Auxiliary (ATA), a division created to transport Royal Air Force (RAF) aircraft around the country. On January 5th, 1941, she flew off course in adverse weather conditions during an RAF mission aboard an Airspeed Oxford. Reportedly out of fuel, she bailed out before her airplane crashed into the Thames Estuary.

The crew of an English ship, the HMS Haslemere, spotted her descending into the water. As they saw her alive and calling for help, the ship’s commander dove into the water to rescue Johnson. Sadly, he could not find her due to poor visibility and a strong tide. The commander died at the hospital a couple of days later following exposure to the cold. Amy Johnson’s body was never recovered. Some historians maintain that the pilot died because she was sucked under by the ship’s propellers. This claim, however, has never been proved. What we do know for certain is that Johnson, one of the first female pilots in history, died in the call of duty, leaving a legacy of numerous achievements that continue to inspire all women aiming to conquer the sky.

São Paulo: Much more than The American Cup Championship 2019

Empty legs: the best way to enjoy the comfort of private jet flights and save money